What is a gig worker?

The word ‘gig’ is a slang word which refers to a job that only lasts a certain amount of time. This is why you hear this word used by musicians, referring to a concert.

The working definition of the term ‘gig economy’ is;

“The gig economy involves the exchange of labour for money between individuals or companies via digital platforms that actively facilitate matching between providers and customers, on a short-term and payment by task basis.”

Essentially this means that gig workers are independent contractors that find work through online platforms. A gig worker would enter a formal agreement with a company to provide services to their clients. Some examples of gig workers would be;

Gig work on the rise

It would be hard to argue that we are living in a new era of working. Many people are now working from home due to the current pandemic and this may be permanent for many workplaces even when the pandemic is over. As well as this, it has been clear in recent years that more and more people have chosen to be a gig worker. It is preferable for a lot of people to not be part of the typical Monday to Friday, 9 to 5 business hours,  as they can choose when to work and make up their income with a few different gig jobs. This type of work was on the rise anyway but there has been a sharp increase in people seeking out this type of work during the pandemic. A couple of factors may be driving this. Firstly, unfortunately during this pandemic many people have lost their jobs so are seeking a different source of income. Secondly, whilst many businesses have suffered during the pandemic, many have thrived, and some of these thriving businesses are associated with the gig economy. More and more people have been ordering takeaway deliveries to their home, which means companies like Deliveroo are becoming increasingly popular. Also, with the closure of non-essential shops, and people not wanting to leave their homes, there has been more parcel to home deliveries from places such as Amazon. So there are plenty of jobs to go around for anyone wanting to do some extra gig work.

Below we can look at some statistics regarding the rise in searches online for gig work. We have pulled up some data from Google searches where you can see the increase;

There is a clear increase in all of the above Google searches between March 2019 and November 2020, showing the greatest interest in people wanting to either do courier work or fast food delivery. The biggest jump in numbers for all these searches comes between March and May 2020 which is when the UK first went into lockdown. The lockdown explains the jump as this could have been when many people lost their jobs, were furloughed or it could just be people taking an opportunity to bring in some extra money with the higher demand for these jobs.

We may have seen a rise in the number of searches for these jobs, but there are other areas of the gig economy that have been affected negatively. With people being stuck at home and many non-essentially businesses closed, this of course means the taxi industry has taken a huge hit, which in turn means less work for Uber drivers and fewer people interested looking for work in this area. We can now look at the statistics for Google searches that involve people looking for gig work as an Uber driver.

With this table you can see the same pattern emerge, but in reverse. As the biggest drop in numbers comes around the time the first lockdown happened. The numbers picked up slightly after the lockdown but did not reach the height they were originally at.

The trends above are more easily seen in the chart below with just 4 popular search terms. 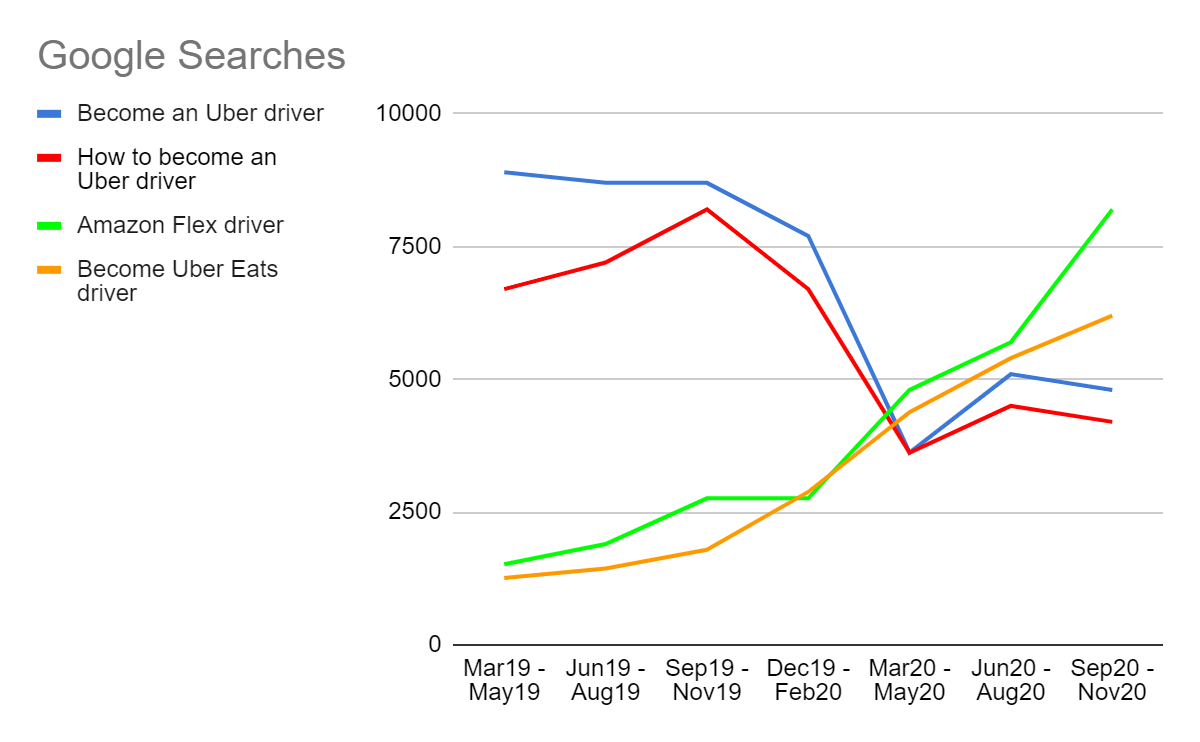 The history of the gig economy

The following statistics have been sourced from a study done in 2018 by NatCen Panel;

Courier services is the most common type of gig work, 42% of those involved in the gig economy have done courier work of some description. Transport services was the second most popular (37%), and food delivery services were third (21%)

Uber appears to be the most popular company used, as 18% of gig workers say they have used Uber for jobs. Of course you can use Uber for taxi services and for food delivery.

The levels of educational attainment between gig workers and the general population are very similar.

55% of those involved in the gig economy said they did jobs frequently, by doing jobs around once a month. Only 9% said it is was a daily basis, and 14% said it was a ‘one-off'.

In general courier work appears to be the most lucrative, with 32% of people saying they earned £13 per hour or more.

The majority of people involved said they used gig work for extra money on top of their usual wage. Only 8% said that gig work was their only source of income.

53% of people said they were satisfied with their choice to do gig work. Mostly this is down to having independence and flexibility.

The gender split with people involved in the gig economy is quite even, with 54% being men and 46% women.

The future of the gig economy

It appears as though the gig economy will continue to grow, it is estimated not so long down the line, the amount of people doing gig work will outweigh those who work in a full time steady job. The appeal of working in your own time and having huge flexibility in your job is great for many people. Many of those currently involved in the gig economy are very happy doing this sort of work and will continue to do so, which shows it works as a lifestyle.

We have seen a huge impact that the pandemic has had on the gig economy, some positive, some negative, but this is temporary as we could see a steady increase in the interest in gig work before the pandemic hit. Once the world has had time to settle down there could be people switching from the 9-5 job, to work with more options and flexibility.

The best and worst courier companies to work for

Now that you have decided to take on some courier work, how do you decide who to work for? Choosing the best company for you can be a minefield, as there are so many things to consider. We wanted to take away some of this strain, so we have compiled ...