Nationally, drink driving incidents are decreasing over the years, we have included a table further down this page that shows this. Yet still, in 2017 alone, Brake.org.uk states that 250 people were killed in the UK as a result of drink driving.

Which of the following statements do you most agree with?

Drink drive limits are a contentious topic, with many lives having been affected by it either through convictions, or the untimely loss of someone they know due to it. We were interested in finding out just how many people consider the limits set by the UK Government to be correct.

The main results from our survey of 1000 people worked out as follows;

The results of our survey shows that over half of people questioned, believe that there should be a decrease in the legal drink driving limit in some form, with 52.90% choosing one of the options to decrease the limit. Could more be done to decrease drink driving accidents in the UK? It appears as though there are huge numbers of people who are not happy with the current laws.

We asked the public some more personal information including gender, age, region and whether or not they own and drive a car. The results can be broken down further. 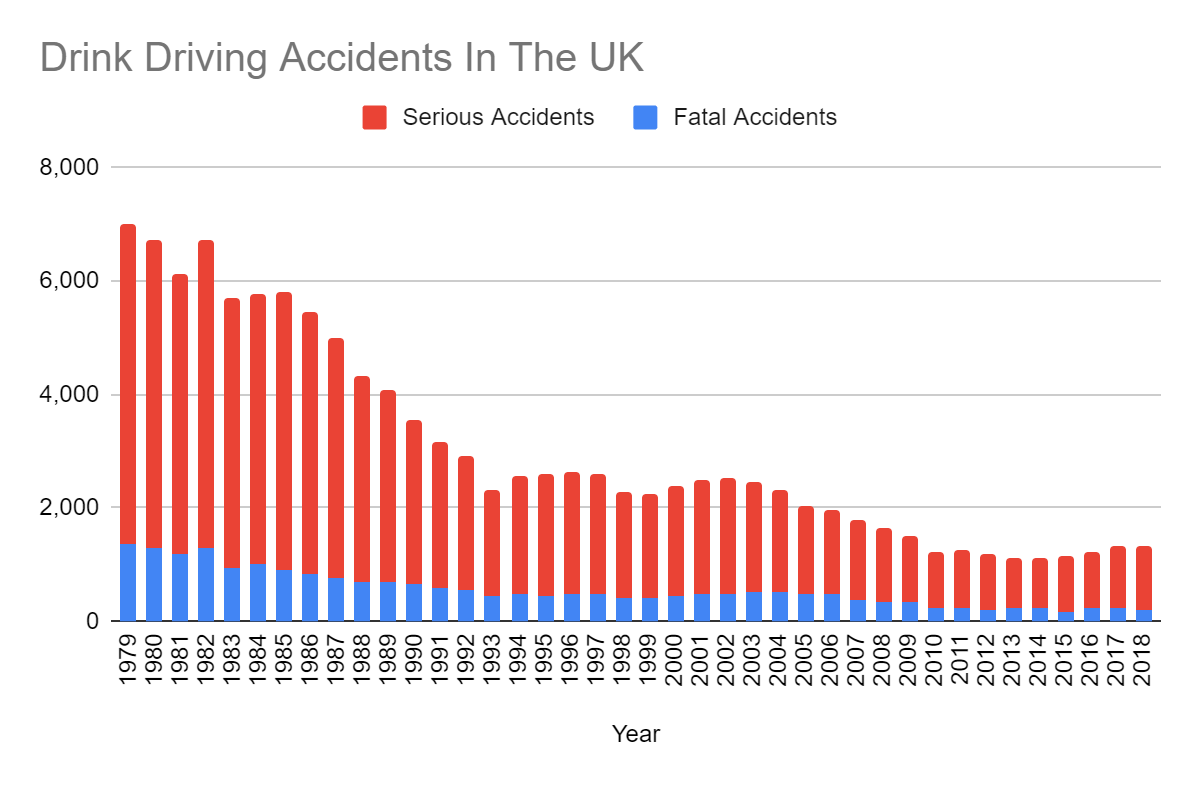 One of the main reasons that accidents have fallen over the years would probably be due to stricter laws being administered. The survey we have conducted shows that there are a large number of people who still think like the legal drink driving limit should change in some way again.
At the moment the current drink driving limits in England, Wales and Northern Ireland are;

In Scotland it is even lower than this, with it being;

You can see from the chart above that there has been a continual decrease in the number of accidents due to drink driving. However, it does appear to have plateaued since around 2010. This may be due to no major changes happening in the law since 2010. The first drink driving legislation came into play in 1872 and we have continued to tighten restrictions as time went by, but do we need to tighten further? Let's have a look at the history of drink driving laws in the UK.

The History of Drink Driving Legislations in the UK

1872 -
This first legislation for drink driving was not in reference to driving a car, as it became an offence to be intoxicated whilst being in charge of a horse, carriage, cattle or a steam engine. The punishment was a fine, no greater than 40 shillings. You could also face a prison sentence, no longer than one month.

1925 -
It became an offence to be in charge of any mechanically propelled vehicle in a public place or a highway. The punishment would be a fine, no greater than £50 or a prison sentence no longer than 4 months. The person in question could also be disqualified from driving for a minimum of one year.

1930 -
There was still no measurable limit to how much alcohol you could consume behind the wheel, but it did become an offence to be in charge of a motor vehicle while ‘Under the influence of drink or a drug to such an extent as to be incapable of having proper control of the vehicle’

1960 -
There were no new laws regarding drink driving but there was a change to the wording of the previous law to ‘unfit to drive through drink or drugs’ There was still no measurable legal limit.

1967 -
This was the year where an actual measurable legal alcohol limit came into play. The limit was set at 80 milligrammes of alcohol per 100 milliliters of blood. This limit has not changed to this day in England, Wales and Northern Ireland. It was also announced this year that breathalysers will be phased in.

1983 -
After years of testing beforehand, breath testing was finally being used. To this day, breath testing is still the main way of convicting people of drink driving.

2002 -
If you were convicted of causing death by driving and being under the influence of alcohol or drugs, you would now have to pass an extended test before you were able to legally drive again.

2010 -
A major government review was carried out, proposing reducing the legal drink driving limit to 50 milligrammes of alcohol per 100 milliliters of blood, which has now been implemented in Scotland. The possibility of permanent disqualification for repeat offenders was also discussed.

The number of people being convicted of driving or attempting to drive whilst over the legal alcohol limit is also decreasing as the years go on. The statistics below, are from drinkdriving.org, and they show the decrease in convictions between 2005 - 2015;

Of all the the convictions mentioned above, the following is the breakdown of the punishments handed out;

*Prison sentences ranged from up anywhere within a year. The majority were given a sentence of less than 3 months.

Drink driving is not the only problem on UK roads. Take a look at our drug driving statistics piece.

Caught drink driving? What to do & what to expect?

Driving under influence is a strict “No”. Around 8,000 casualties & 240 deaths are witnessed from drink driving a year and hence you can fathom the magnum catastrophe here caused by such an unethical act. However, people make mistakes. It could be that you are meeting your school friends after ...

Drink driving over the Christmas period

During the month of December, alcohol consumption in the UK increases by over 40%. In spite of repeated campaigns by the Government on the rules of road safety and scheduled police vigilance in the UK, every year during Christmas around 700000 people are said to sit behind the wheels. This ...