How safe do you feel when driving alongside Heavy Good Vehicles or HGV’s?

We asked the general driving public how they felt about it and have pulled together some data regarding accidents/incidents involving HGVs too. Read on for more information.

The MTRU (Metropolitan Transport Research Unit) reported in 2018 that HGVs are much more likely to be involved in fatal road traffic accidents than other vehicles. The report did specify that whilst the likelihood of a fatality occurring from a HGV is greater, the overall statistics for general accidents that do not result in a fatality are more in line with other vehicles. The reason for the higher fatalities from accidents is most likely due to the sheer size and mass of the vehicles as opposed to them being any less safe on the road. Number of Fatalities has fallen

Based on figures produced by Eros, (European Road Safety Observatory) the last few years have seen a drop in the number of deaths that have occured due an accident involving a HGV. In the EU the number fell as low as 40%, before increasing slightly.

Number of fatalities in accidents involving a HGV

You can see this better represented in the graphs below. 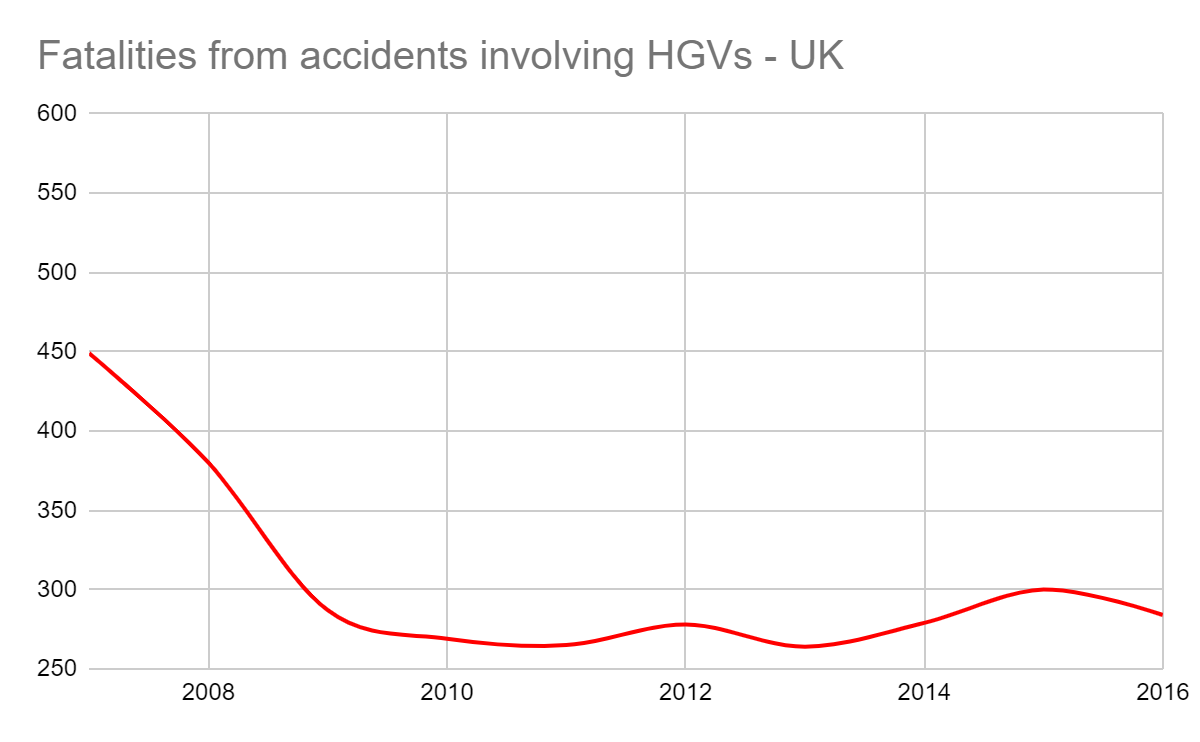 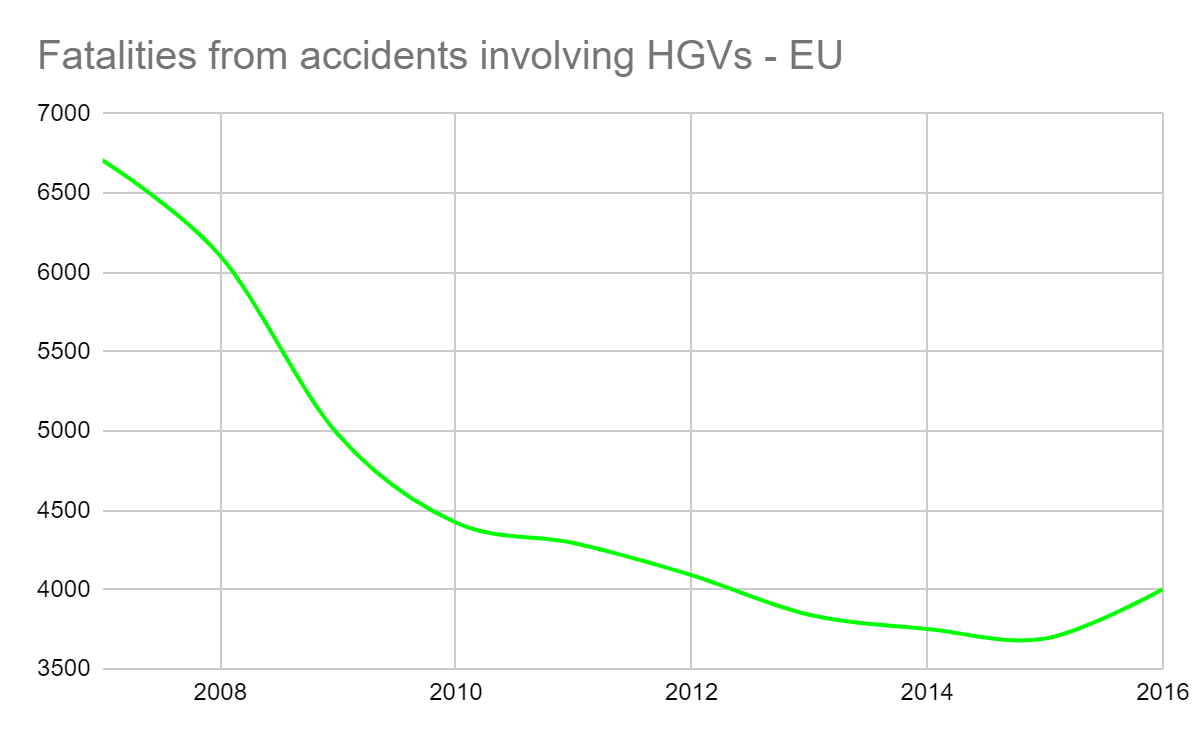 Where do HGV accidents happen?

According to EROS the majority of accidents involving a HGV do not take place on a motorway. They are more likely to occur on an urban or rural road where a HGV may take up a lot of space. In the UK specifically only 10% of all HGV accidents occurred on the motorway.

The percentage of HGV accidents occurring on the motorway across all of the EU is 19%, so the UK is on the lower end of that spectrum.

The average fatality rate across all of the EU for accidents involving a HGV is 8.1 per million people whereas the country with the lowest rate is Estonia with 1.5 per million, and Poland is the highest with 20.6 per million.

The fatality rate across the EU for accidents involving a bus or a coach is 1.2 per million. Significantly less than the fatality rate for HGVs. This data was true as of May 2018.

Regarding the safety of HGVs on the road, we conducted our own survey in which we asked

Which of the following statements do you agree with, if any? (tick all that apply)

I feel perfectly safe encountering HGV drivers on the road while I am driving my car.

None of the above

I have had a near miss with a HGV before

I have had an incident (crash, bump, etc) with a HGV before

The answers to this question appear to be fairly mixed, almost the same amount of people feel unsafe around HGVs as people who feel perfectly safe.

A breakdown of the results

The 1,393 respondents also gave details such as their age and gender. You can learn more from looking into these details. For example we can breakdown the answer regarding the near misses by age;

I have had a near miss with a HGV before

As you can see from the table above, the age category with by far the biggest percentage of people who agreed they had a near miss was the youngest category. With that percentage significantly falling in the older categories. It is possible that the simplest explanation is that the younger drivers have been involved in more near misses with HGVs due to their own inexperience rather than there being any safety issues with HGVs. Statistically, drivers under the age of 24, and over the age of 80 are more likely to be involved in a road accident. This comes from gov.uk.

Here is the results when we break the same question down by gender;

Another interesting statistic that has arisen from the height of the Coronavirus pandemic in 2020, is the rise in the number of Google searches for HGV driver jobs during the first lock down. You can see this below;

All three of these Google searches peak around the first lockdown and then tail off after that. You can see that all three of them have a similar pattern. 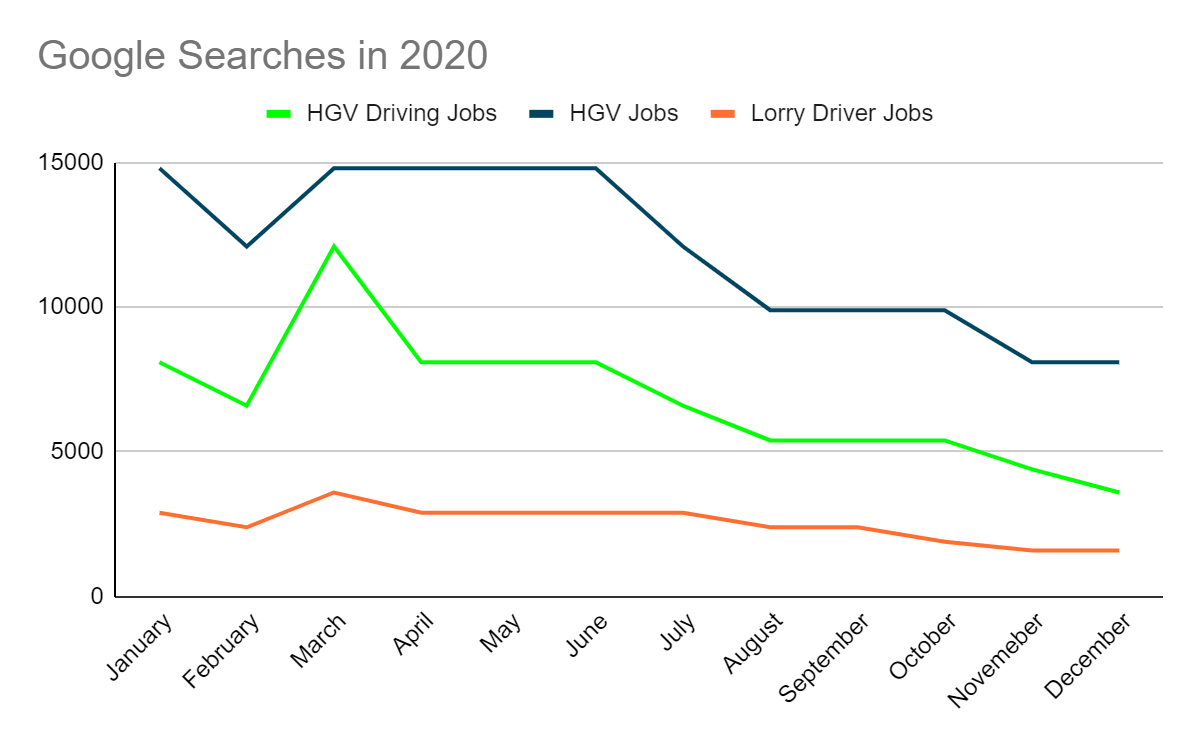 All three searches follow a similar pattern, with the spike in ‘HGV Driving Jobs’ being the most obvious. So while there may not be statistics to show they HGVs are more likely to be involved in a crash, although any accidents they are involved in tend to be more serious due to the sheer size and weight of the vehicles.  Our survey showed mixed results on whether people feel safe driving alongside a HGV, but in terms of the results regarding accidents and near misses, the result could be explained by other factors such as the age and gender of the person driving the car. There is no clear evidence that HGVs are any more dangerous than other vehicles.