The electric car market is growing rapidly. In 2010 there was a market launch of mass-production electric cars and since then it has continued to rise. The UK government has plans to ban the sale of new petrol, diesel and even some hybrid cars by 2030. The change was initially supposed to come in by 2040, but experts have warned that this may be too late if the UK wants to hit its target of emitting almost zero carbon by 2050, hence the UK government bringing it forward. This future ban surely means that more and more people will decide to switch to an electric car before this year in preparation for the ban.

Here at Insurance Revolution, we wanted to get an idea on what the general population's opinions are when it comes to electric cars. This is why we conducted our own survey asking 1,000 people to what extent they either agree or disagree with the following statements;

We can break down the answers to the survey questions below; 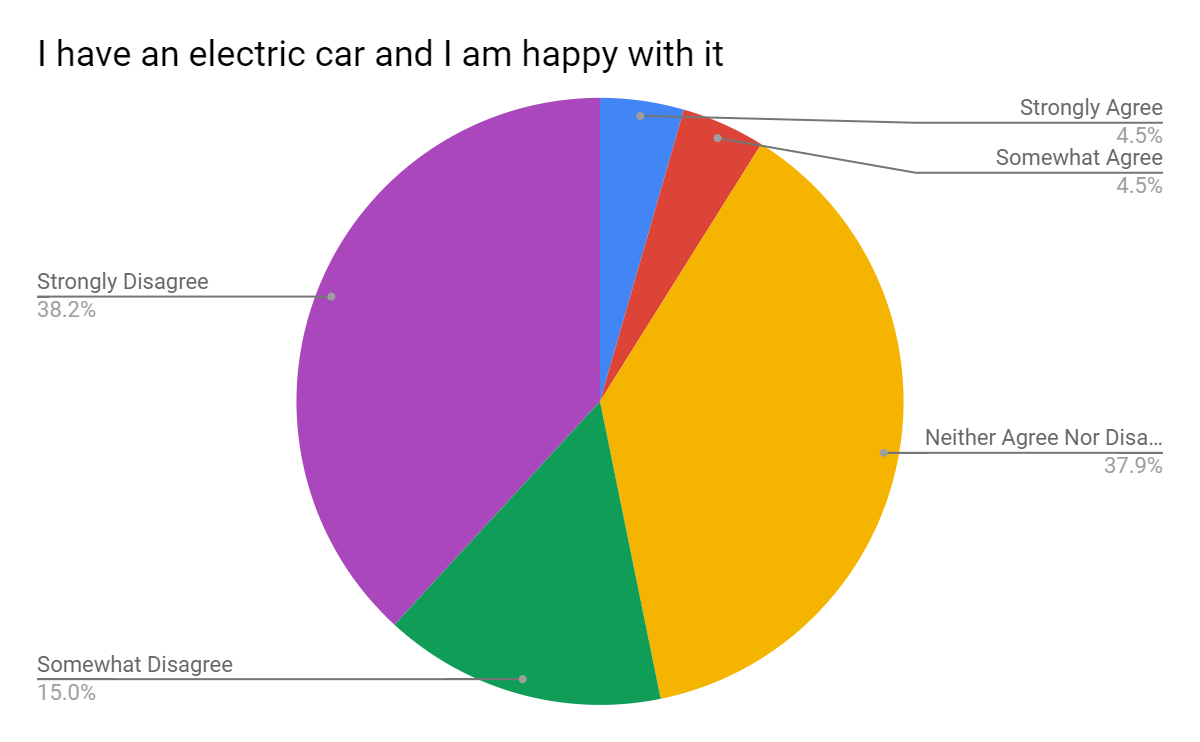 Only 9% are happy with their electric car

Of everyone we surveyed that does own an electric car, less than a tenth of people stated they are happy with the car. This potentially shows that many improvements need to be made to electric cars, before the government ban comes into play. What are the reasons people are unhappy with the electric car? We can see some of these answers below. 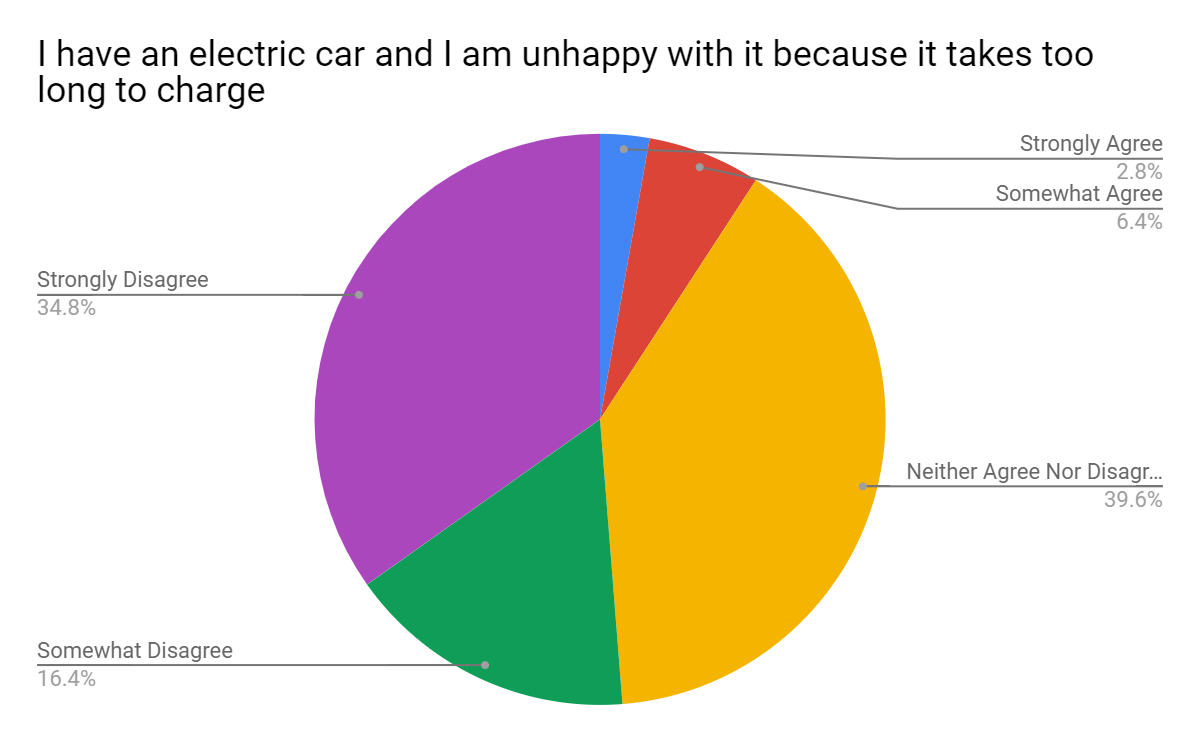 Charge time not the issue 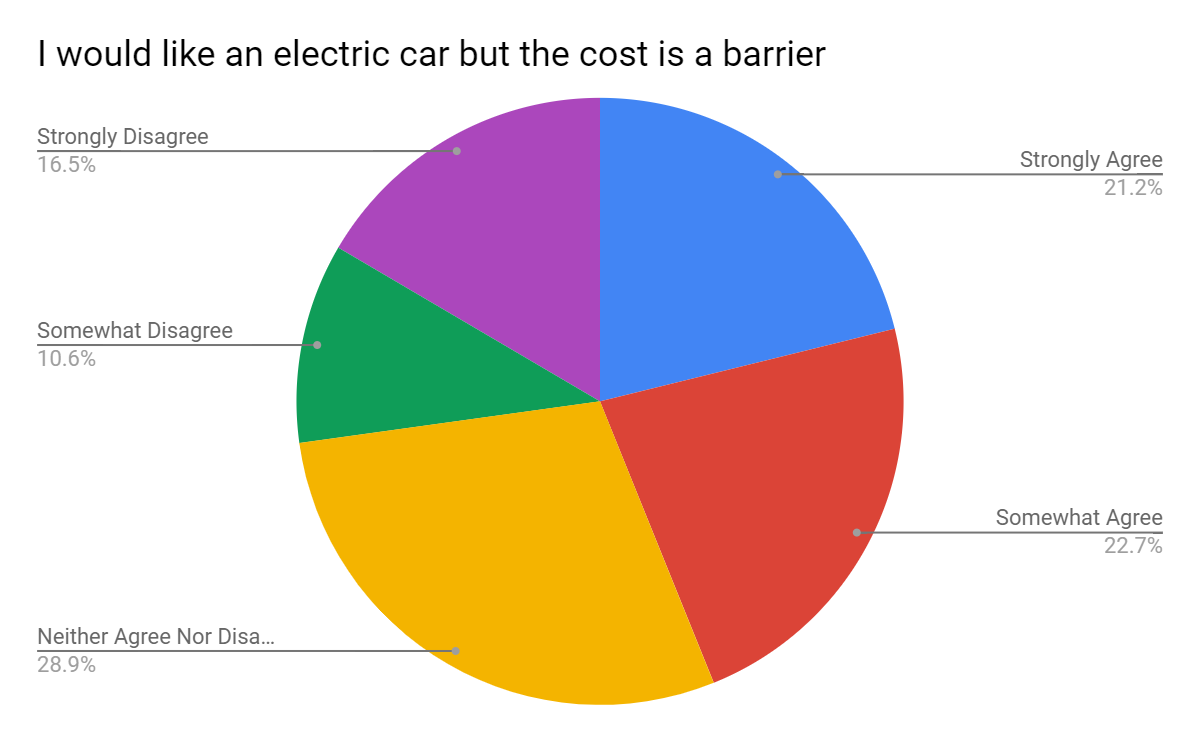 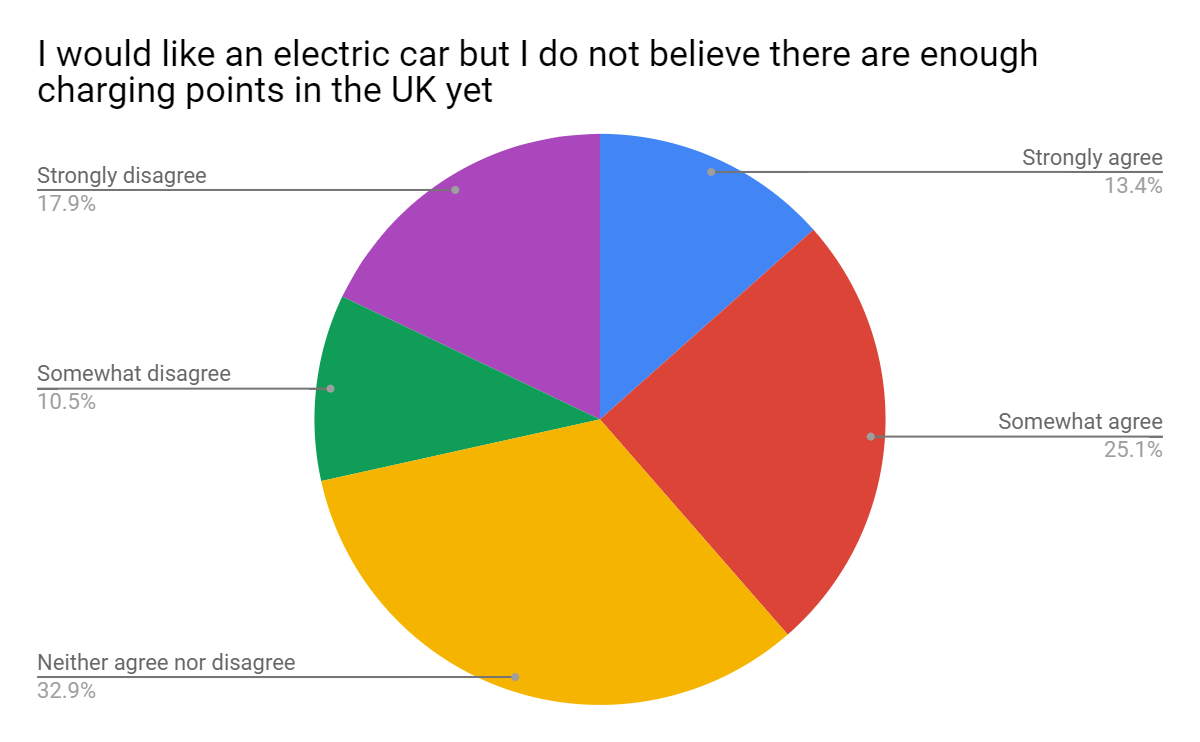 Opinions are divided on whether there are enough charging points in the UK. Around 38% of people said that the fact there are not enough charging points in the UK would stop them buying an electric car. 28% of people disagreed with this and the rest were not sure. There is no high majority opinion on this. I think it may be the case that it is not really common knowledge how many charging points are around the UK, and where they are. The fact is there are now 30,000 charging stations at 11,000 different locations in the UK. There were 10,000 charging points added in 2019 alone, so it is becoming easier to keep on top of the battery, and it will continue to do so. Maybe if this information was more easily accessible and was common knowledge, there would be more people already switching to an electric car. 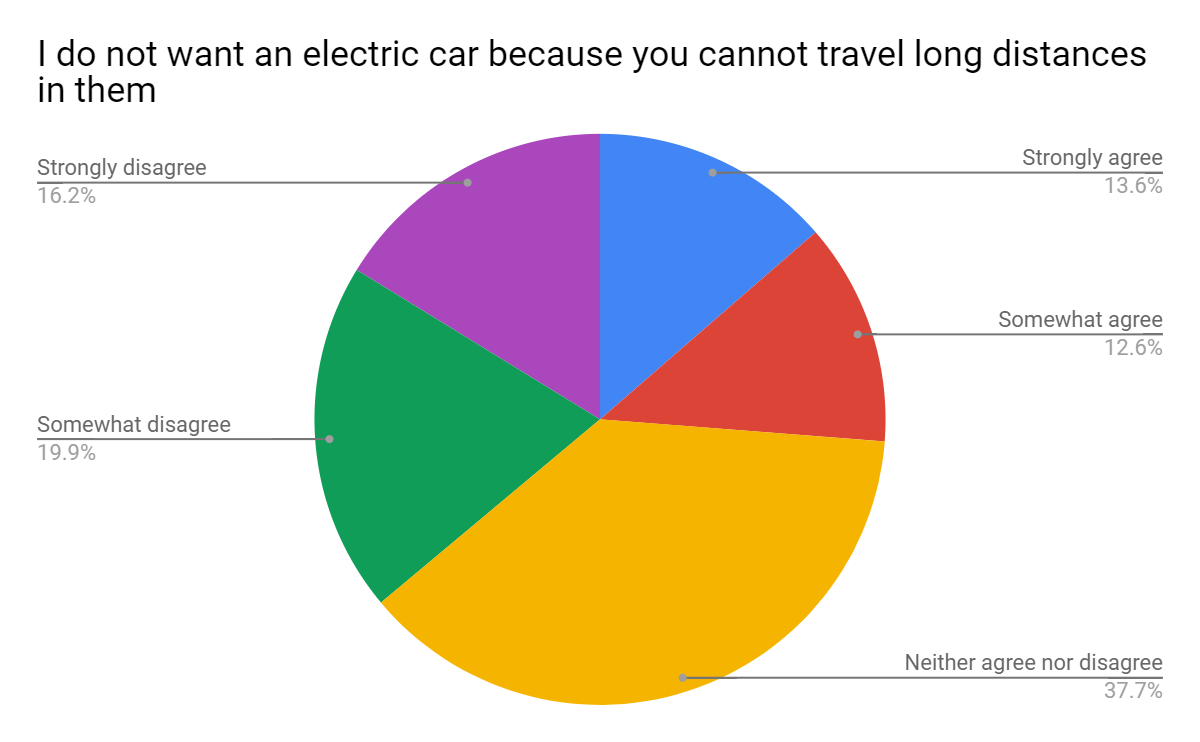 Distance is not a problem

Looking at the answers to this question, only 16% would not consider an electric car because they believe you cannot travel long distances in them. Most people seem to be aware that most electric cars now do not have an issue with mileage. It may be true that on average a standard petrol or diesel car can travel further on a full tank than an electric car can travel on a full battery, but the electric cars mileage capabilities are nothing to be frowned at. On average, with a full battery electric cars can travel close to 200 miles, and it can be topped up at your home every night. If you travel less than 200 miles a day, which most people would, you should never have an issue with the miles. On the occasion you make a long trip there are many charging stations scattered around the country so you shouldn’t ever have to deal with an empty battery. Many electric cars can do more than 200 miles on a full tank, Tesla’s for example have a range of models, many of them claim they can travel up to 300 miles or more on a full battery. With technology always advancing, it is likely that the batteries in electric cars will continue to improve.

Attitudes to electric cars in the UK

Looking at the results of our survey there does seem to be mixed opinions on electric cars. Especially from those who do not own electric cars. It might be fair to say that the mixed opinions from non electric car owners may be due to lack of information that is out there. The improvements being made in the electric car market do not appear to be common knowledge, with many people assuming that there are not enough charging points around, or the battery will not take them to their destination. While it may be the case that there have been many improvements to the electric car owner experience, this does not mean that it is perfect. Only 9% of electric car owners we surveyed were happy with their car. There is a long time to go until the government ban on the sale of new petrol, diesel and hybrid cars. So you would think that by this time, with advances in technology, owning an electric car will be a much better experience.

Size of the electric car market in the UK

The electric car market is growing. As mentioned above there was a market launch of mass produced electric cars in the UK in 2010. Ever since this date the number of electric cars on UK roads increases every year. You can see from the charts below the comparison between 2019 and 2020 alone. These figures have come from The Society of Motor Manufacturers and Traders (SMMT). The figures show the comparison between electric car registrations from the  beginning of 2020 up to June and the beginning of 2019 up to June. 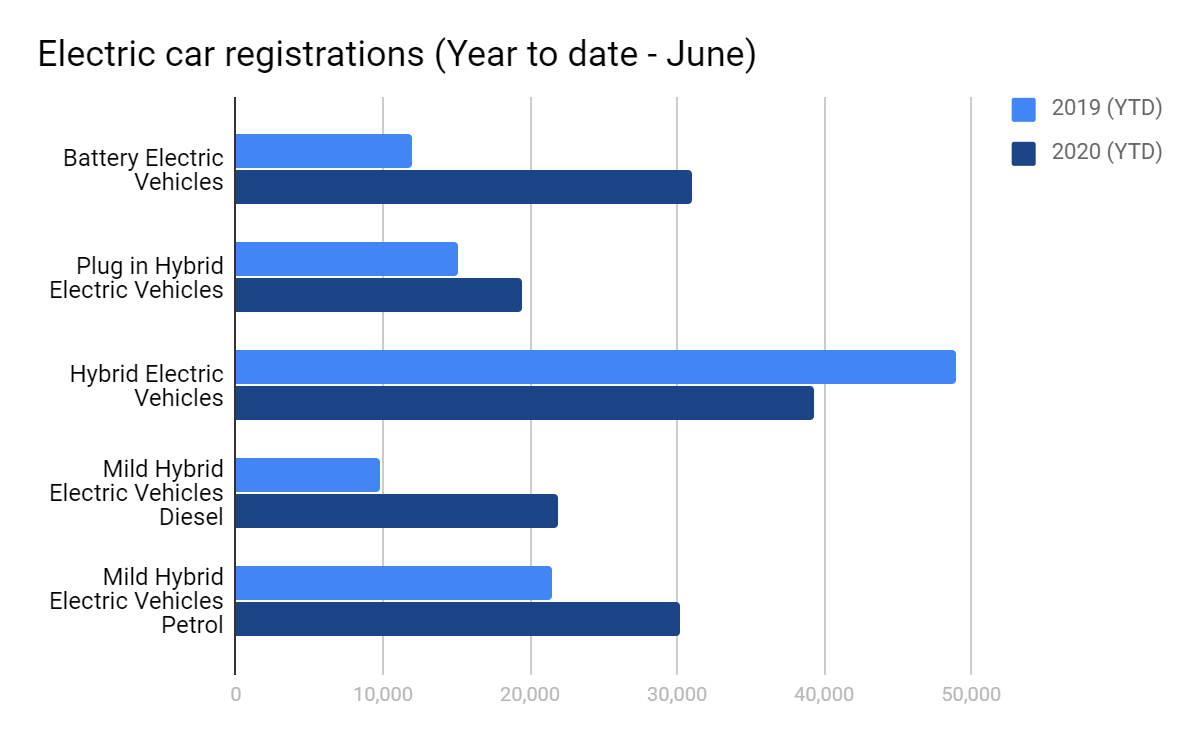 You can see in all but one category of electric cars there have been plenty more registrations than the previous year. According to a survey conducted by ‘Fully Charged’ only 1 in 10 people said they would go back to a petrol or diesel car after owning an electric car. There certainly seems to be a trend of more and more people switching to electric cars.

Where are electric cars most popular?

We can see the improvements which are being made in the UK when it comes to the electric car market, but the UK are not one of the leading countries when it comes to the market share of electric vehicles. In fact the UK would be 15th if they were included in the list above, with a market share of 2.9% in 2019. One thing that is clear though is that electric cars are the future. They are not a passing fad. Improvements will most likely continue to be made and in the not so distant future the sale of standard cars will be banned. If you are someone that prefers a petrol or a diesel car, you should enjoy it while it lasts.

How Many Times Does It Take On Average To Pass Your Driving Test In The UK?

UK follows a strict driving test policy to ensure only the most competent drivers on road. A successful passing of the test will reward you with full legal GB or Northern Ireland driving license. It was the Road Traffic Act 1934 which made it compulsory to sit and pass the ...

Would your job affect your insurance rate?

Do you know a school bursar would be quoted £372 while a so-called window cleaner would be subjected to £4,607 when both of them are insuring same vehicle in same postcode? Yes, your occupation would have a decisive impact on your insurance rate. Make no mistake, it’s not about income ...