We have put together some data regarding driving licence statistics in the UK. The majority of the data has been sourced from data.gov.uk. These statistics are true as of September 2020.

The data below is not a representation of the amount of active drivers in the UK, this is data regarding the number of holders of licences, of course some of these holders may not own or drive a car currently. It is also worth noting that certain driving licence categories can be issued to 15 year olds, up to two months before their 16th birthday.

Below is a table with the number of licences owned by people aged 15 - 21.

You can see that the numbers of provisional licence holders from ages 17-21, between male and females are almost identical. When it comes to full licences then that the difference widens, as many more males own a full licence than females.

Statics for driving licences from ages 22-30

The total number of people aged 22 with a provisional licence is 266,534 which is a decrease from the data for young drivers above. This number continues to decrease at every age above this. 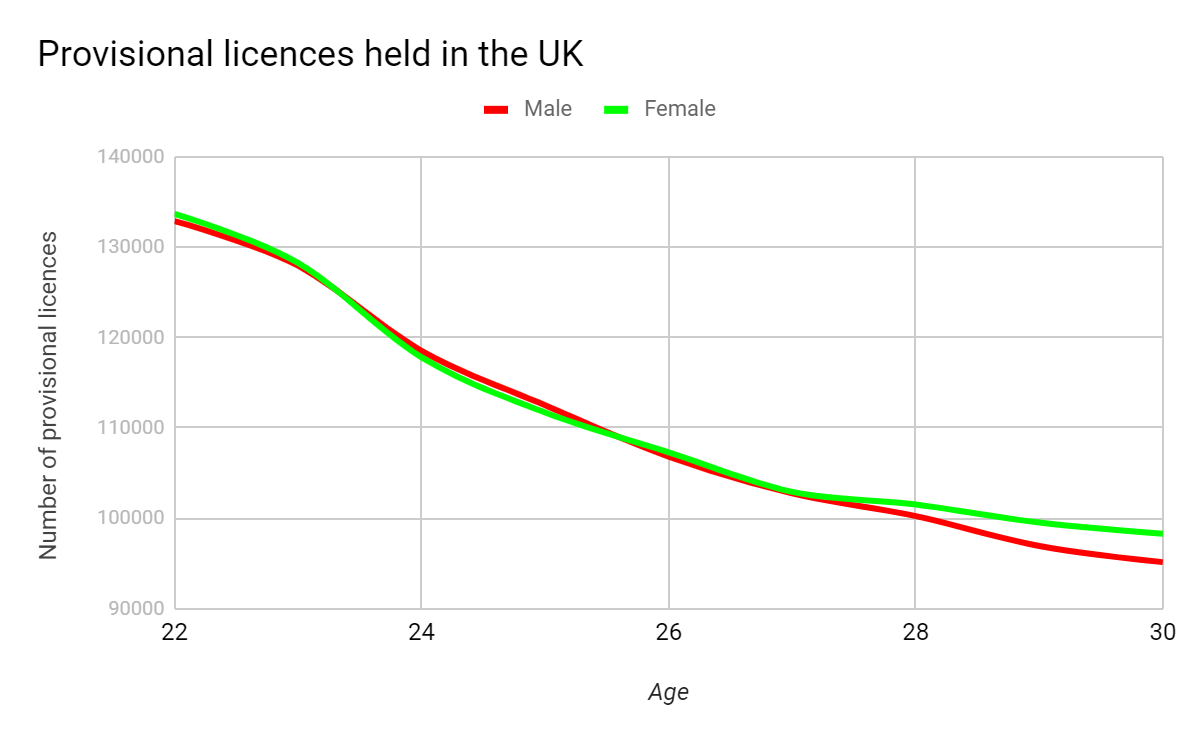 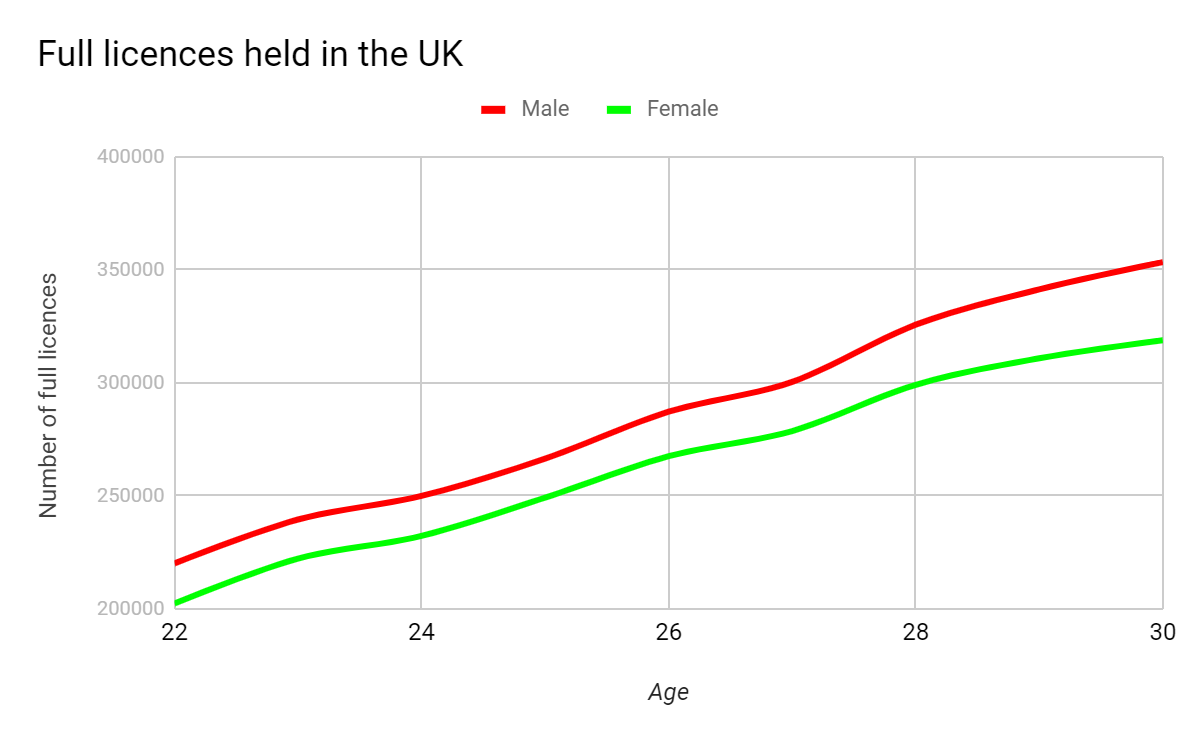 Another thing to note from this graph is you can see the gap between male and female full licence holders begin to widen.

You may notice from the data below that the vast majority of licences held belong in the 48-58 age range. Specifically, the most popular age currently for holding a full licence is 55.

You will also see a huge decline in the number of people who own a provisional licence in this age range. 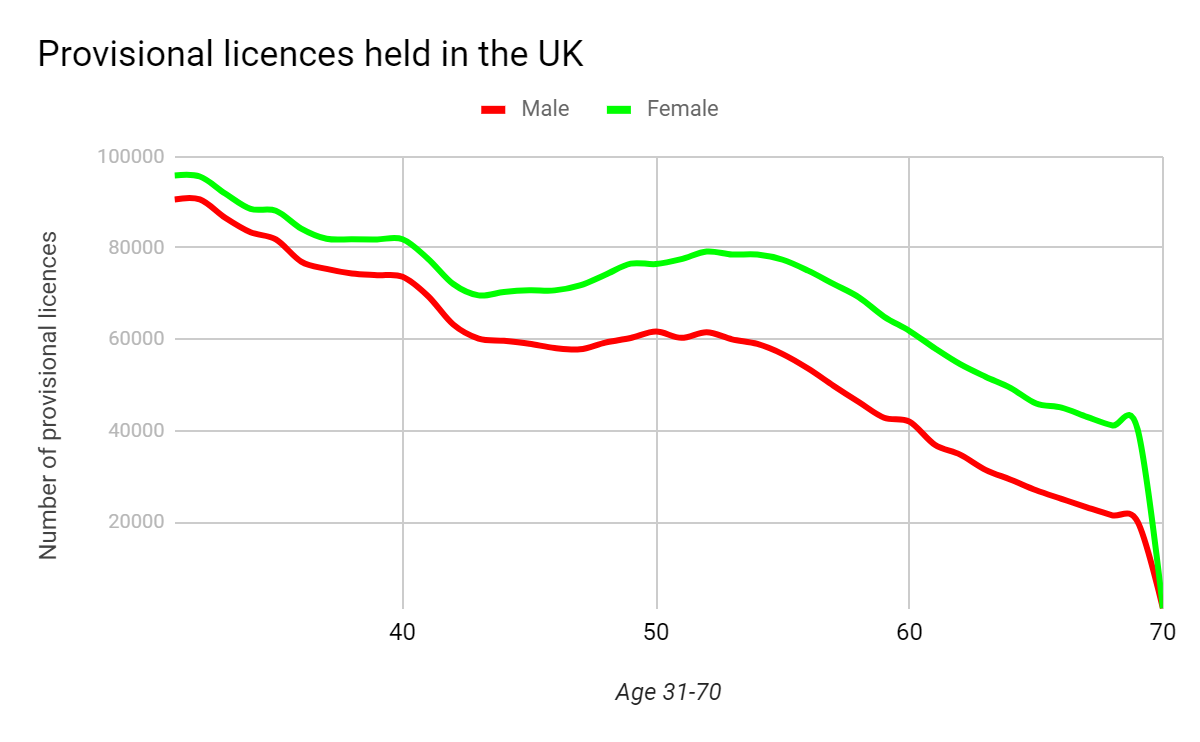 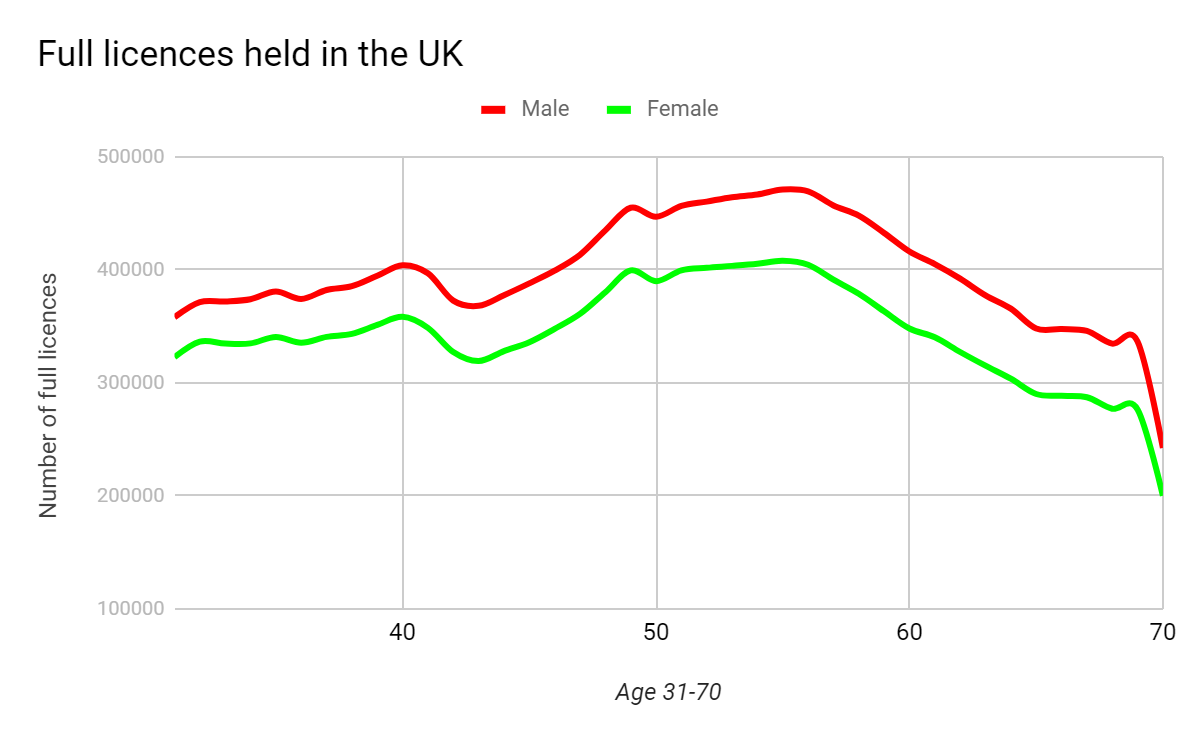 Again, there is a gap in numbers between males and females with full licences, the pattern between them is almost exactly the same.

Driving licence statistics in the over 70’s

We will now look at driving licence statistics from ages 71-108. The reason for the 108 specifically is because there is one person aged 108 that owns a full licence in the UK. This is the oldest licence holder. 108 is the only age where there are more female owners of the full licence than males, and there is one holder.

The oldest age for owning a provisional licence is 106, as there are two. 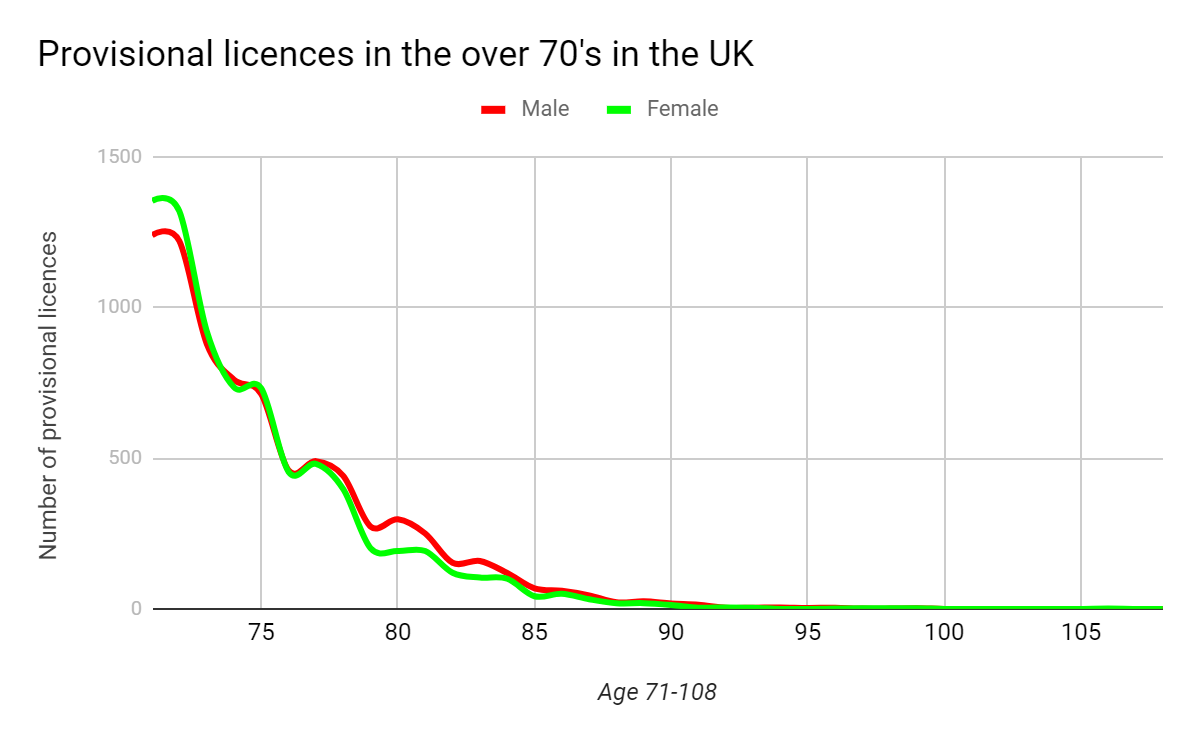 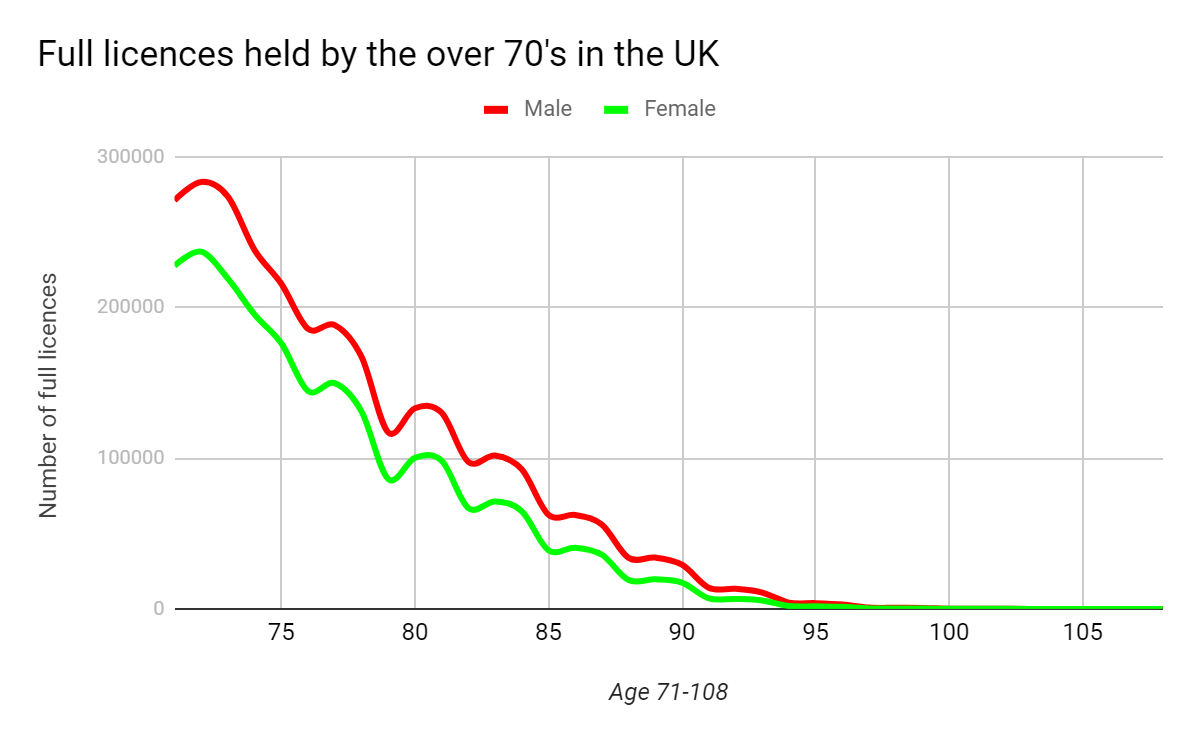 Again, there is a clear pattern between males and females owning full licences in the over 70’s.

There are still a huge number of over 70’s who own a full licence, including both males and females together there is a total of 4,988,402.

Now that we have looked at driving licence statistics in the UK we can look at some information from around the world.

In the UK you can legally hold a licence at 17. But how does this differ in countries around the world? There is not too much of a difference, the age is most commonly set at 18 around the world, but we will take a look at some of the different continents rules regarding the minimum driving age.

Most countries in Africa have the minimum age set at 18 but there are a few exceptions. Cameroon, Zambia and Zimbabwe have it set at 16. There may be varying rules around holding a restricted licence in each country.

You can get a restricted licence at the age 16-17, this varies between states. A full licence will vary between 17-18.

Most provinces in Canada the legal age is 16, within the graduated licensing program (GLP). However in Yukon, Nunavut and the northwest territories the age is 15 with GLP. Even younger still, in Alberta the age is 14 with GLP.

Most countries here have a minimum driving age of 18, with a few exceptions. You can drive at the age of 16 with parental approval in Guatemala and Panama. In El Salvador the minimum age is 15.

It is fairly straightforward in South America, the minimum age is either 17 or 18 depending on the country.

All countries bar one have a minimum driving age of 18. In Sri Lanka the driving age is 17.

All countries have a minimum driving age of 18. In Japan you are able to drive motorcycles under 400cc at the age of 16.

The minimum age here varies from 17-18 depending on the country. In Vietnam and Malaysia you can drive a motorcycle at 16.

The majority of the countries here have a driving age of 17 or 18. In American Samoa, Guam and New Zealand you can drive at 16, with supervision. More specifically, there is a minimum driving age of 15 years and 6 months in Northern Mariana Islands.

There are many countries in Europe and the majority of them have a minimum driving age of 17 or 18, but there are some exceptions, see below. Many countries also allow you to drive a moped at the age of 16;